I’ve been riding a big Kate Davies wave lately.  Sweater weather finally arrived, and my own Carbeth pullover is turning out to be my go-to sweater.  I’m reading Handywoman (Davies’ recently published Memoir) and I just finished St. Catherines, a cardigan pattern she came out with back in the summer.  Plus, she just published Doocot, another pullover pattern.   Guess what?  I’m about to cast on for that one!

There’s something accessible and forgiving about these patterns that is making me love them… a lot.  That accessibility and forgiving nature applies to the knitting and the wearing of these garments.  This all means that these projects are doable and can be fully appreciated by all levels of knitters.

Starting with Carbeth, I mentioned it’s my new go-to.  I’ve been wearing it weekly – it’s totally irresistible.  My fast fingers knit up this sweater in less than a week, but even less-speedy knitters will be able to finish this project in a reasonably fast amount of time.  Its seamless construction is about as easy at it gets.  Even its yoke shaping, which tends to be the part of seamless sweaters that require the most attention, is foolproof.  When it comes to wearing my Carbeth, it’s an absolute joy.  Mine, which is knit up in Quarry, is light as a cloud – but warm.  Its seamlessness makes it seem like an extension of my pajamas – that’s how comfortable it is.  I feel incredibly indulged when I wear it – but it looks so awesome that no one else needs to know it feels as good as my pajamas. 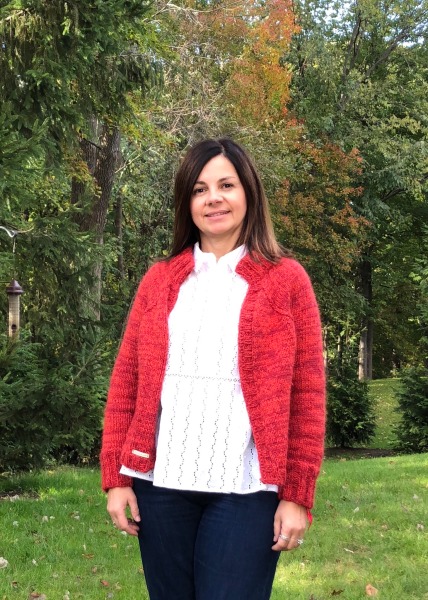 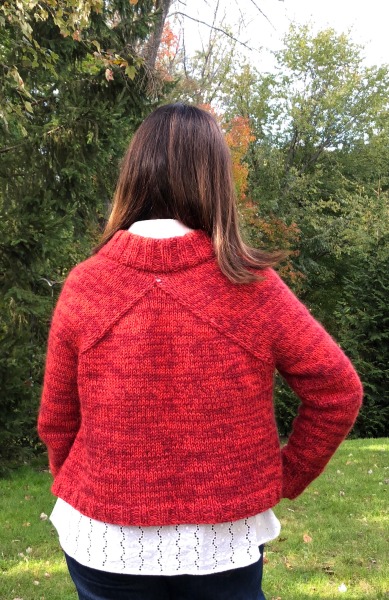 Carbeth-fever is finally picking up in our Wool & Grace community.  Knitters are coming in, knitting it in Quarry (of course), using a combination of Loft & Shelter, with Juniper Moon’s Fourteen or doubling HiKoo’s Kenzie.  I love mine so much that I’m going to cast on a second one very soon!  I am totally in awe of Sophie, one of our knitters, who did her Carbeth Cardigan in Kenzie and marled it (using two strands of different colors).  She’s the inspiration for my next one… now I just need to settle in on colors!

I felt absolutely compelled to make St. Catherines shortly after Davies published this pattern.  I apparently had a very visceral reaction to Davies sporting her striped version with her newly cropped haircut.  I couldn’t help but look up to this woman, small and stature and obviously big in personality, sporting her gray cropped hair with uncompromising confidence.  I felt this way so much that I had to make that sweater!

I opted to make mine in Loft (because I’m totally obsessed with Loft) in an olive green that will complement the abundance of camo and black I’m wearing this season.  St. Catherines’ construction is different than anything I’ve ever made, but easy.  Knit up in garter stitch, you really only need to pay attention to which side is your Right Side.  It’s construction is quite clever.  Neck shaping and lower-back shaping are done with short rows – but these are garter stitch short rows that require nothing so much as turning your work back and forth.  St Catherines is worn as bolero or shrug, but since I wanted mine more like short cardigan, I made simple, imprecise modifications to lengthen it and reduce the difference of the length of the sweater from the front to the back.  When I say “imprecise” – I mean I relied on my knitters intuition to guide me through the changes.  I tried it on a lot as I went along.  I planned none of these changes and just kind of went with it.  I didn’t even take notes.  The end result is an absolutely awesome sweater.  It’s unlike anything I’ve ever owned or wore.  This sweater looks amazing over dresses and open necklines – and I think it even looks cool when I wear it with my mom-jeans.  I can only imagine how soft it will get as I wear it non-stop this year (because that’s what happens with Loft).  The joy of knitting this up will no doubt carry over into an absolute joy in wearing it.

My Loft-version of St. Catherines has a lot of body and bounce.  I think St. Catherines would also be gorgeous in something like Brooklyn Tweed’s Peerie, or Birch or Staccato (both from Shibui).  Making a version in Tosh Merino Light or Baah’s La Jolla would give you a more draped, painterly version.

Now I’m ready to knit up Doocot.  This is a simple boxy pullover worked with a dk-weight yarn.  I’m actually going to get out of Brooklyn Tweed Land and knit up this one using Gedifra’s Metal Tweed.  I’m also going to lengthen it a touch, making it about 11” from the armhole.  I’m going to make the size 40, so it’s roomy but not oversized.  At this size and length it’s going to feel like another luxe, long-sleeved tee.  I’ve swatched already, and Metal Tweed’s fabric is absolutely wonderful.

Doocot is a simple, top-down, seamless construction, and it’s going to be a great first-sweater for any aspiring sweater-knitter.  It’ll be easy for anyone to modify it to lengthen it (she’s been going strong with the cropped look – but it’s not for everyone).  Before I realized that this was a perfect project for Metal Tweed, I thought about knitting it in Arbor, Dromedary, Stargazer, or using a combination of Cima and Pebble (from Shibui).

Davies is clearly an accomplished designer.  Her lace and color-work designs are other-worldly.  She’s a scholar on many subjects including Scottish textiles, among other things.  While we know she’s capable of intricate design work, I’m incredibly grateful to designers like her who write patterns that are so accessible, and allow newer knitters to be successful in their sweater knitting.  I don’t know why I’d want to jump off a wave like this one, so I’m going to keep riding the Kate Davies Wave for a while.

View all posts by margotkziggy